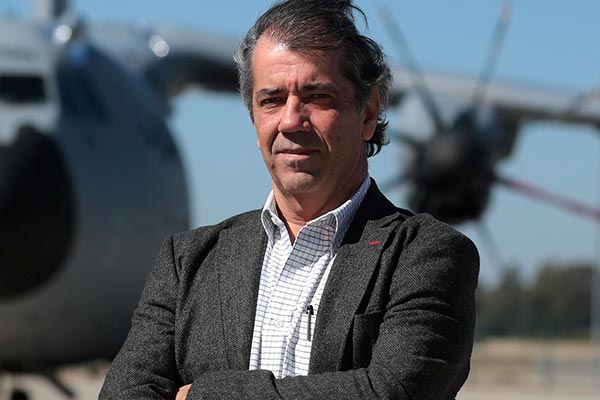 “I think it is crucial that the aerospace sector is recognized as a strategic sector in Spain. Although this has often been said, it has not yet been acted upon in any concrete way. Action has been taken in other countries with evident success”

Is it possible to keep doing more with less?

When you compare what we are doing now with what we were doing five years ago, you realize that we all do an infinitely greater number of things these days. We send more emails, we make more calls, and so on. We are condemned to always doing more with less, I’m afraid. In my eyes, the important thing is to do more with less but also to do it differently and quicker. The world is changing at breakneck speed. Who would have thought five years ago that the problems facing the world today would be DAESH, or immigration from Syria? If we continue developing our materials via the same cycles and timeframes as we have done up to now, we will miss the bus. We need to focus on doing more with less–and faster, taking advantage of technology.

What does Airbus and its industry contribute to Spain?

It allows the country to be at the cutting edge of technology, with access to the most innovative technologies and composite materials, as well as markets and all of the associated industrial fabric. We are not alone: there’s also the whole industrial fabric that we generate around us (support enterprises, subcontractors, and so on). But not a lot of people know that. I can’t count the times that we have brought people to visit the Getafe plant and they are absolutely amazed at what we’ve got here: the technology, the know-how, the highly skilled people… All of this excellent know-how enriches the country and generates employment. There are twelve thousand people working in our goup in Spain.

We have the capacity to produce six hundred aircraft a year, as we do already. This is a technology that cannot be improvised. The production chain, the supply chain, the coordination of logistics: this is all know-how. From this point of view, in technological know-how in production chains for complex products, the civil branch is ahead of the military branch. But when it comes to pure systems and equipment technology, the military side certainly has the edge there.

What role can Spain play in defining this European industry?

It is part of the Airbus Group, which is the biggest European defense company. We have Spanish directors in high-ranking roles in the group. There isn’t an Airbus Spain, an Airbus France, an Airbus Germany. There is just the Airbus Group. The headquarters of the military division are in Spain and the headquarters of the commercial division are in France. But our military aviation isn’t Spanish: it’s European.

Do you think Spain needs a new industrialization policy?

Of course. We have the skills here; we have young people, and their knowledge and training, and I would like Spain to have a role in the world as an industrial country. We have everything we need to create powerful industry, and I’d like to see a resurgence of that Spanish industry, contributing what we have at Airbus to that effort. I think it is crucial that the aerospace sector is understood to be a strategic sector in Spain. Although this has often been said, it has not yet been acted upon in any concrete way. Action has been taken in other countries with evident success. Efforts are being made in this direction, and I hope that an important agreement will be reached between the sector and the government in the form of a “Guide to the Aeronautics Sector.” This would be a vital first step on the road, but there’s a long way to go and it will be up to the next government to make sure things happen.